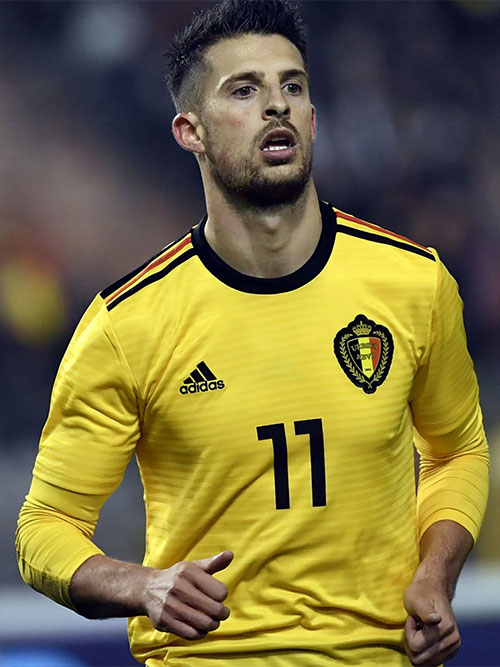 Kevin Mirallas is a youth product of Standard Liege, but made his debut at the highest level in France with LOSC Lille. In Lille Mirallas was nicknamed Ronaldo of the poor during his time at Lille, a reference to his playing style, which is reminiscent of that of Cristiano Ronaldo. In turn, Lille's supporters are often said to be poor. After four seasons, Mirallas traded the club for AS Saint-Étienne in 2009. In 2010, the French club loaned him to Greek side Olympiakos. In Greece, Mirallas found his best form again and even became a crowd favorite. The striker scored several important goals and conquered the national title. In 2011 Olympiakos took over Mirallas permanently from AS Saint-Étienne. His second season was a great success, he became Greek top scorer with 20 goals. Thanks to his goals, the club won the national championship again. He was also rewarded individually: the fans and a panel of experts voted him footballer of the year. Mirallas traded Olympiakos to Everton in 2012. He played almost 200 games in the best league in the world, scoring almost 40 goals. After loan spells to Olympiakos and Fiorentina, Kevin joined Antwerp in Belgium in 2019. Last season he was active for Turkish side Gaziantep FK.  Mirallas made his debut for the national team in august 2007 in a European Championship qualifier against Serbia. In 2008 he was selected to play at the Olympic Games in Beijing. There the Belgian team just missed a medal. Mirallas played 1 major tournament: the 2014 World Cup in Brazil. He eventually collected 60 caps and scored 10 times for the Red Devils. He was part of a golden generation.